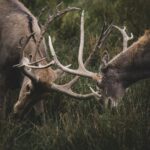 Some may say the best part of getting married is the big blow-out beforehand. Better known to us nowadays as a Stag Do or Hen do. For men, the Stag Do has become ‘the last night of freedom’, with drinks, props, and barbaric behaviour. But when did they cease to be just a few gentlemen raising a glass? What started as a celebration of man-hood has turned into an elaborate spectacle of go-hard-or-go-home. For that, it’s possible we have The Greatest Stag Do On Earth to thank.

It’s 1896. Basketball has just been invented, Coca-Cola has started selling in bottles and the first slot machines were put into bars. Show-going was long popular by this point, in particular, the circus. This was owed to none other than P.T Barnum, or better known to us, The Greatest Showman. It seemed that entertainment ran in the family, and when Clinton Barnum Seeley (one of his grandsons) was to be married, Herbert Barnum Seeley (another grandson) saw an opportunity he could not refuse. To live up to his grandfathers spectacular circus shows, he threw a bachelor party for his brother that they would not forget. 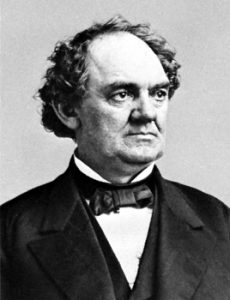 With a gathering of the current socially elite in New York, the festivities composed of a 17-course banquet, music and of course arguably the most fundamental part of all boisterous events: alcohol. Whilst this kick-started a hoot of a party, there was still something missing. You might have guessed it: women! To perform the newly established ‘hoochie-koochie’ dance, Herbert presented ‘Little Egypt’ to his brother. However, only the best for the grandson of The Greatest Showman! Not only did she perform, but she supposedly burst out of a whipped cream pie and was, ahem, completely naked.

Obviously, in 19th century America, this was near enough completely unacceptable. Offensive even. This ultimately lead to the police putting an end to the bash at around 1:30am (boo!). 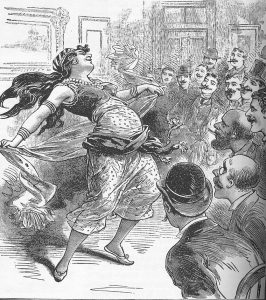 Amazingly, Clinton did indeed get married afterwards. Maybe even more amazingly, a marriage which did not end in divorce. Herbert however, did pay the dear price of his wife for throwing such a party, and was charged with indecency (because well, some things haven’t changed). Due to his wealth, power and position in society, the charges were eventually dropped (again, sound familiar?).

With a mix of classes involved, the stag do created a bit of a stir, you could say. New York was evolving; the gap between higher and lower class people shrinking when it came to dining and partying. 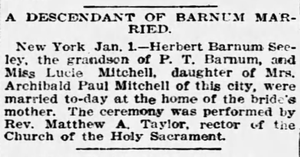 Article Of The Seeley Wedding (source)

It must have been quite a sight to behold, in those times. Fast-forward to today’s stag do, it’s quite standard for a group of men to drink and see an exotic dancer or two. Thanks to Herbert trailblazing the way, the possibilities are endless when organising your stag. Go wild, and indeed, go-hard-or-go-home. Just avoid the best man ending up at court.